Fifteen percent of adults who took ibuprofen during a 1-week diary study exceeded the maximum recommended daily dose limit (EDL), according to a new study published in Pharmacoepidemiology and Drug Safety.

The study involved 1326 adults who reported taking ibuprofen-containing medication in the preceding month. Using a daily diary, the subjects were asked to note all NSAID use, both over-the-counter (OTC) and prescription, for 1 week.

Results showed that among the participants, 87% took only OTC ibuprofen; 9.5% took prescription ibuprofen products exclusively, and 3.8% took both types. Eleven percent of the ibuprofen-only users had exceeded the daily limit on at least 1 diary day.

Thirty-seven percent of the group also took a second NSAID during the week, mostly aspirin (24%) and naproxen (17%). Overall, when all NSAIDs were considered, 15% of participants exceeded the maximum daily dose on at least 1 diary day.

The percentage of naproxen users who exceeded the recommended daily limit was 23%, significantly higher than for ibuprofen. Twelve ibuprofen users (8.1%) and 20 overall (10%) exceeded the maximum on all 7 days. However, few participants exceeded the daily limit for other NSAIDs.

The authors note that the relatively high prevalence of EDL among OTC ibuprofen users is concerning as the drug can be taken without medical supervision. They concluding by stating that “educating consumers about NSAIDs and their dosing directions could reduce excess dosing.”

Nonsteroidal Anti-Inflammatory Drugs Substance Use
Next post in Opioid Addiction 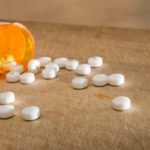 Tamper-Resistant Controlled-Release Oxycodone and Opioid Use: A Population Study