The inclusion of footwear in a foot care package failed to improve foot pain and disability in patients with gout over a period of 6 months, according to study results published in Arthritis Research & Therapy.

Researchers conducted a parallel-group randomized controlled trial that included 96 patients with gout who were randomly assigned to a footwear intervention group or a control group. Participants within the intervention group received gout education and podiatric care, in addition to an athletic shoe, whereas participants in the control arm received only gout education and podiatric care. The primary outcome was the severity of foot pain and pain scores measured at baseline and at 2, 4, and 6 months.

One key limitation of the study was the lack of participant blinding.

“The footwear intervention did not significantly improve foot pain in people without high baseline levels of foot pain,” the researchers wrote.

“However, short-term improvements in overall pain and foot impairment/disability, and more durable improvements in footwear comfort and fit were observed with the footwear intervention,” they concluded. 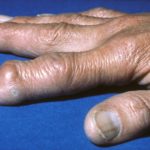