Proximal bone fractures caused by osteoporosis in older adults can cause significant risk of premature mortality, according to research presented at the American College of Rheumatology Annual Meeting in San Francisco.

Research conducted by Lyn March, MD, PhD, from the Kolling Institute of Bone and Joint Research and Sydney’s Royal North Shore Hospital, and colleagues showed that in addition to hip fractures, many other kinds of osteoporosis-related fractures doubled the rate of death.

“Health professionals have been aware for some time that having a hip fracture when you are older increases your risk of dying in 1 to 2 years after the fracture, but we have not been so aware that other fractures could increase this risk as well,” Dr March said in a press release.

The researchers analyzed data from 125 174 older women and
113 499 older men with a mean age of 63 years from the 45 & Up Study from 2006 to 2008 in New South Wales, Australia. They identified fractures and deaths by linking these data with information from the Emergency Department Data Collection, Admitted Patient Data Collection, and Registry of Births, Deaths & Marriages. The average follow-up period was 5.7 years.

“We were surprised to find that almost all fractures (apart from fingers and toes) in the elderly were associated with increased risk of dying when compared to other men and women of the same age who had not had a fracture,” said Dr March in a statement. “Common fractures like spinal fractures that cause older people to stoop over; arm, collarbone, and wrist fractures from a simple fall; or pelvic fractures from a trip on the stairs or a slip on the ice all increase the risk of the sufferer dying in the next few years.”

The researchers note that their investigation highlights the need for further study into why these osteoporosis-related fractures cause an increased risk of death and the need to treat osteoporosis as a serious condition. Even though one-third of fall-related deaths are attributed to low bone density, osteoporosis is not always well managed or treated, most likely because there is a lack of awareness about how dangerous osteoporotic fractures can be, the researchers suspect. 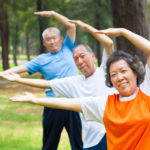