The presence of low back pain and lumbar kyphosis are “useful clinical signs” that may indicate both functional disability and knee symptoms in people with knee osteoarthritis (OA) — and particularly among women, according to research published in Arthritis Care & Research.

Using data from the Nagahama Prospective Cohort for Comprehensive Human Bioscience, researchers conducted a cross-sectional analysis to determine the association between low back pain and lumbar kyphosis with functional disability and knee symptoms in a population of patients with knee OA.

The total cohort included 9850 patients. Of these patients, 1682 participated in the physical assessment; 586 patients were included in the analysis (mean age, 68.8±5.2; range, 60-81 years; 80.1% women). No significant differences between sexes were noted regarding KSS function or symptom score. Lumbar lordosis angle and comorbidities, including diabetes and osteoporosis, were higher in women, but women were younger and had a lower body mass index than men.

A total of 14.7% of participants had lumbar kyphosis (n=86; 70 women and 16 men). KSS scores were not significantly different between groups, but KSS function scores were found to be significantly lower in participants with lumbar kyphosis compared with those without. The adjusted mean difference in women with lumbar kyphosis was -6.32 points (95% CI, -10.01 to -2.63) compared with those without; in men, the adjusted mean difference was -6.92 points (95% CI, -13.70 to -.015).

Study limitations include the relatively small subgroup sample sizes, limiting the researchers’ ability to reach conclusions about the relationships in question in men, a lack of radiographic evaluation for spinal stenosis, and a lack of information on the severity of low back pain.

The researchers noted that future longitudinal studies are warranted to determine “how [low back pain] and/or lumbar kyphosis could influence functional disability and symptoms in patients with knee OA.”

“These findings suggest that both [low back pain] and lumbar kyphosis are useful clinical signs indicating functional disability and knee symptoms in patients with knee OA,” the researchers concluded. 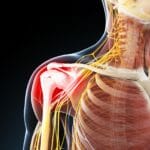 Shoulder Pain in T2D Patients Most Likely Due to Subacromial Disorders