A majority of patients with fibromyalgia and comorbid osteoarthritis who undergo total joint replacement results were found to have better outcomes 6 months after surgery when they had improvements in fibromyalgia symptoms, according to study results published in Rheumatology.

The study included 150 participants undergoing knee or hip replacement with an FM survey score ≥4 before surgery. Patients were classified according to improvements in fibromyalgia symptoms 6 months post-surgery: patients in the top tertile indicated the greatest degree of improvement (“Improve;” n=48), and patients reporting “Worsen/Same” fibromyalgia symptoms (n=102) were in the bottom 2 tertiles. Baseline symptom characteristics, improvement in overall pain intensity, surgical pain severity, and physical function were assessed in both groups 6 months post-surgery.

A total of 6.3% of participants in the lowest tertile reported a 30% reduction in fibromyalgia symptoms compared with 89% in the middle tertile and 100%  in the top tertile.

At baseline, participants in the Worsen/Same group had higher levels of fatigue, depression, and surgical site pain compared with patients in the Improve group (P <.05 for all). Age, gender, and surgical cohort were comparable between groups.

Participants in the “Worsen/Same” group had smaller improvements in overall pain intensity and physical functioning 6 months post-surgery (P <.05 for all).

Study limitations include a loss of approximately 25% of participants before the 6-month follow up.

“Future studies will determine whether and how these patterns hold in other surgical cohorts with high levels of comorbid [fibromyalgia] symptoms,” noted the researchers. 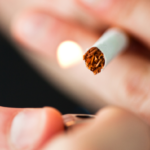 Effects of Smoking on Pain Intensity in Early Rheumatoid Arthritis