Recurrent headache in children is common; migraine is the most frequent pediatric headache type, reported in up to 60% of children and adolescents worldwide.1 Because headache has a significant impact on a child’s quality of life, affecting school performance and physical and social activities, recent investigations have begun to question the potential interaction with metacognitive processes that are developing during this same period.

In 1979, Flavell of Stanford University in California first described metacognition, including the cognitive processes, beliefs, and knowledge that combine to allow for understanding that one’s thoughts are unique, facilitate strategic planning and goal-setting, and the ability to read and assess one’s own mental state.2

Metacognition develops throughout childhood to create evolving awareness of a child’s own thoughts, beliefs, and emotions, along with a sense that they can monitor and control these processes. He elaborated on this concept with theory of mind (ToM), which described the further development of this ability to empathetically apply self-knowledge to someone else’s state of mind in order to understand and predict their behavior. These are 2 critical developmental abilities that color a child’s perception of themselves and the world, but also influence their experience of that world, including pain.

Recent evidence has pointed to potential impairment of both metacognitive processes and ToM being associated with migraine in children. Patterns of impaired ToM have been seen with epilepsy, and in 1 study that evaluated children with headache and epilepsy.1  Various studies have shown that neurophysiologic functions including psychomotor ability and cognitive domains of information processing and attention are compromised in adults with headache.4

A number of independent studies have indicated some involvement of organizational thinking related to metacognition in various neurologic conditions. A parental report on 75 children with Chiari malformation type 1, a developmental structural abnormality of the cerebellum in which brain tissue from the back of the brain protrudes into the spinal canal, found that 69% of pediatric patients had headaches as a complication. An overlapping one-third of participants in the study also demonstrated higher than normal impairment of executive function, particularly with regard to working memory.3 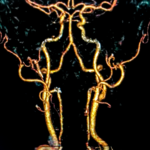