Prescriptions of tramadol for the treatment of headache and other types of pain have increased in recent years. Because it was not scheduled as a controlled substance by the Drug Enforcement Administration until 2014, the misconception may remain that tramadol is a safer option with less risk of dependence and adverse effects compared with other opioids.

A review published in Current Pain and Headache Reports highlights the the need for clinicians to remain vigilant when prescribing tramadol, as its concurrent use with opioids poses a risk of serotonin toxicity.1

In addition, many physicians are unaware of the risk of serotonin toxicity from opioid use, particularly when combined with antidepressant medications. This is primarily due the lack of relevant instruction in most medical schools and residency programs, according to co-author Hossein Ansari, MD, FAHS, an assistant professor of neuroscience and director of the headache clinic at the University of California, San Diego.

The physicians who most commonly prescribe opioids – pain specialists, primary care doctors, and emergency department physicians – typically have not had “even one minute of formal didactic lecture on clinical pharmacy during their residency training, so when would they learn about this interaction?” he said. “The answer is ‘never,’ so they keep prescribing since they simply do not have the medical knowledge about it,” he told Clinical Pain Advisor.

This knowledge gap can have life-threatening consequences, including the risk of serotonin toxicity, which can lead to the potentially fatal serotonin syndrome (SS).

Patients either starting  a serotonin-based treatment, or stepping up their dosage may develop SS triggered by overstimulation ofpostsynaptic serotonin receptors. Symptoms associated with SS vary widely and a lack of awareness of its features can lead to frequent under-diagnosis or misdiagnosis.

The current review of relevant research found that the majority of SS cases occurred with tramadol use vs other opioid analgesics usedconcomitantly with a serotonergic drug.

Prevention of SS is key, and although various sets of diagnostic criteria have been developed, they may primarily identify patients with advanced serotonin toxicity. Physicians should be aware that any patient taking a serotonergic opioid, particularly in combination with another serotonergic drug is at risk of toxicity.

A detailed examination of a patient’s active medication list is critically important, and the authors propose that early detection of serotonin excess may be facilitated by viewing it along a spectrum of the following 3 stages, which may overlap in some cases.

Dr Ansari recommends that physicians avoid prescribing an opioid for a primary complaint of headache.

“If you feel that a patient needs something strong for headache, simply refer the patient to a headache         specialist – not to a neurologist,” most of which are not actually headache doctors, he advised. Awareness of  SS  and its early detection are becoming increasingly important. “With the current pattern of patient care, we  will see  more patients with serotonin toxicity, for sure,” said Dr Ansari.

Physicians should be aware that any patient taking a serotonergic medication should be monitored for     serotonin toxicity, and the spectrum proposed in the current review may help with detection. Early diagnosis is  key    to preventing progression to the life-threatening condition known as serotonin syndrome. 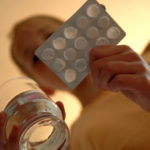