Richard Talusan, DNP, FNP-BC, NEA-BC, surveyed all 40 primary care providers (PCPs) at the VA-Las Vegas to determine whether they felt they would benefit from an OMC to assist in identifying opioid abuse, misuse, and diversion.

After implementation of the OMC, the percentage of PCPs who completed the user survey (n=30) and reported following the VA/DoD clinical practice guidelines increased from 58% at baseline to 90%. Furthermore, more than half of survey respondents indicated that they routinely accessed the PMP to check for doctor shopping among patients on opioid therapy after participating in the OMC (54%).

“By accessing the PMP to screen their patients on opioid therapy, PCPs can help identify and stop abuse and misuse of opioids as early as possible with subsequent referral for treatment as indicated,” said Dr. Talusan.

All PCPs who referred patients to the OMC (n=11) reported overall satisfaction in having the OMC co-manage their patients on chronic opioid therapy.

To be eligible to participate in the study, participants needed to have provider-diagnosed chronic noncancer pain and be prescribed chronic opioid therapy, have a history of substance abuse (ie, heroin, cocaine, alcohol), and/or demonstrate provider-identified and documented aberrant behaviors (ie, report of medication loss, request for early refills). 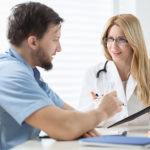