Recently, The Atlantic posted the following brain teaser/search-engine-optimizing clickbait: What is the most underappreciated medical invention of all time?

No definition of terms was supplied — they wouldn’t want to do anything to discourage ridiculous responses.

For helpful inspiration, they also posted answers from an array of luminaries, ranging from the president of the American College of Physicians (the stethoscope) to an actor on a medical-procedural show (tongue depressors).

Don’t get me wrong — I loved it! My only complaint is that they didn’t poll more actors. Don’t you want to know what item the cast of Emily Owens, MD (rest In peace) thinks should get more love?

Anyway, I was willing to bite. Having spent a minute or two in the trenches, I can tell you that what we’re all criminally under-appreciating is the smartphone. What’s that you say? Not only is the smartphone not a medical invention, but people talk about it all the time!

It’s time to update your iOS, my friend. The smartphone was made for doctors, and there aren’t enough hours in the day to sing its praises.

You see, before the smartphone, doctors actually had to know things. Hours were spent memorizing facts and reading textbooks — I assume. Now? Wikipedia, you are my only friend. Attendings are forever pimping you regarding the importance of calculating a Ranson or a FENa. Cool story, bro. But do they know how to open a MedCalc app?

I once even saw an older doc — she was, like, 40 — speaking in tortured but probably hard-learned Spanish to try to better relate to her patient. Do you think she’d even heard of Google Translate?

If I didn’t have a smartphone with a dope camera attached, how would I collect a ton of gross-out pictures to drop on my unsuspecting friends at brunch? And before these magic phones, how did you watch Netflix on a call, or between cases, or even during rounds?

The smartphone has clearly saved more lives than any other invention — including the lives of lazy residents. (We’re people too, aren’t we?)

But you know what, you’re right — it can’t hold a candle to a tongue depressor. 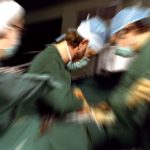