Neuropathic pain may potentially be reduced with minocycline. These findings from a narrative review were published in the Journal of Pain Research.

Researchers from 3 universities in South Korea searched publication databases through January 2021 for articles (N=9) on minocycline and neuropathic pain. The studies included in this review included 232 individuals who were given minocycline for their pain in randomized clinical trials (n=7) or prospective observational studies (n=2).

Among patients with chemotherapy-induced neuropathy, 2 studies reported a positive effect and 1 study showed no effect. One positive effect was reported in a study of patients (n=22) with breast cancer receiving minocycline 100 mg twice daily for 12 weeks. These patients reported less pain and used less opioid medication.

Minocycline did not appear to be effective for the treatment of carpal tunnel among 43 patients who underwent surgery. They received 200 mg of the drug 2 hours before surgery and then 100 mg twice daily for 5 days.

A reduction in pain was reported by patients (n=25) with diabetic neuropathy. After 6 weeks of twice-daily 100 mg minocycline, their pain measured on the visual analog scale was reduced from 6.7 to 2.9.

Patients (n=11) who took 100 mg minocycline daily for 3 months for their leprotic neuropathy reported a 75% or greater reduction of pain, and all but 2 patients had functional improvement as well.

A study that included patients who had various etiologies of neuropathic pain found that after 4 weeks of escalating minocycline doses from 100 mg to 200 mg, pain was moderately reduced from 5.6 to 5.3.

No study reported negative side effects.

These data indicated some patients with neuropathic pain, especially those with leprotic neuropathy or diabetic neuropathy, may benefit from minocycline therapy with little risk for adverse effects. 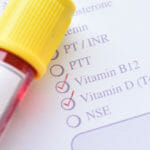 Changes in B12, MMA, and Homocysteine Linked to Peripheral Neuropathy