A large percentage of individuals with early rheumatoid arthritis reported unacceptable levels of pain or widespread pain regardless of smoking status, according to study results published in Nursing Open.

In the cohort, 16 patients were current smokers, 24 were previous smokers, and 38 had never smoked. Current smokers had a median 15 cigarettes/day and had smoked for a median of 43 years. There were no significant clinical differences between smoking groups. Median pain duration was 7 months (range, 0.25 months to 32 years), and 31% of participants reported having had pain for >1 year. Current smokers and previous or never smokers had comparable pain intensity, with 56% reporting unacceptable pain ( >40 mm on a visual analog scale).

A total of 77% of participants reported having spread pain, with no significant differences between smoking groups; 28% of participants had chronic widespread pain (ie, >3 months duration), 19% were current smokers, 38% previous smokers, and 26% never smokers.

There was a positive correlation between disease activity (evaluated via the Disease Activity Score-28 for Rheumatoid Arthritis [DAS-28]) and pain intensity (r = 0.52; P =.05).

Study limitations include a small population.

“There was a high frequency of patients with unacceptable pain and widespread pain, irrespective of smoking status. However, pain intensity correlated positively with disease activity, [and] we cannot exclude that the inflammatory‐associated pain overshadowed a possible effect of smoking,” concluded the study authors. 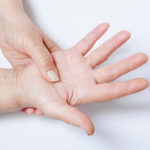