Younger patients with migraine had greater cerebrovascular reactivity (CVR) impairment in the posterior cerebral artery (PCA), which may predispose them to increased risk for stroke, according to a study published in the Journal of the Neurological Sciences.

In this cross-sectional study, patients with migraine (n=248) and normal controls (n=105) were recruited at Samsung Medical Center between October 2015 and March 2017. Patients included in the migraine group were those aged 21 to 60 years with a diagnosis of migraine with or without aura, an absence of diagnosed vascular risk factors, and no current use of any regular medications or migraine preventatives.

Healthy controls were matched on each basis, except with no history of migraine or memorable headache in life. To measure CVR, 2 neurophysiologists blinded to patient information used transcranial Doppler; patients were considered interictal if they did not have migraine headaches in the previous 48 hours. Examination included bilateral middle cerebral arteries, bilateral PCAs, and basilar artery, with a breath-holding maneuver to determine the CVR.

There was a correlation between age and CVR in the PCA in patients with migraine (Pearson’s correlation coefficient=0.16, P =.012), and there was no correlation between CVRs in the bilateral middle cerebral artery and basilar artery with age. In the control group, there were no correlations between age and CVR in any tested vessel. Path analysis revealed that the age of onset fully mediated the effect of age on PCA CVR. Longer disease duration negatively modified the effect of age of onset (P =.018).

This study was limited in its generalizability due to the participants having been recruited from a single university hospital. The cross-sectional analysis does not reveal the cause-and-effect relationships. 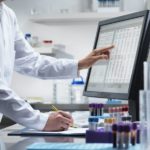