AA is a 78-year-old male patient who has spinal stenosis with localized pain to the lumbar spine; he also reports bilateral hip and buttock pain.

The patient was not followed by any other pain provider as verified by the patient and through the state’s prescription monitoring program. AA was prescribed both immediate-release and controlled-release oxycodone when he began treatment as a new patient at this clinic. He was now on a daily dosage of more than 300 mg/d of oxycodone with reported poor pain control.  Pharmacogenomic testing was not available at the time of initial presentation, so it was not known how well he was metabolizing his opioid medication.

During one of his monthly follow-up visits, AA inquired about the use of a fentanyl patch for pain control. He said he had heard great things about this pain medication and was excited about the possibility of not having to take oral medication as he was currently prescribed.

We agreed that an opioid rotation would be allowed to assess use of the transdermal opioid patch.  We provided AA with instructions on how to proceed with his rotation and then issued the opioid medication, starting him at a conversion of 50 mcg/h.

Approximately one week into the opioid rotation, AA was seen briefly outside of the clinic. He was asked how the opioid rotation was going, and he replied that the patch was the best thing he had ever used.  He reported better pain control and fewer adverse effects.  When asked if he had any difficulty using the medication, he responded by saying that the patch continued to fall off despite repeated efforts at taping the area where the patch was applied. He was then asked to stop by the clinic later that day for further evaluation.

When AA was next evaluated, the area where he applied the fentanyl patch was completely covered with medical tape.  When the patch was removed, we immediately noted that the plastic backing on the patch had never been taken off.  We asked AA if this had ever been removed since he began using the product and he replied he never removed the plastic backing. Not only had AA not received any of the pain medication through his skin, he never went through withdrawal after inadvertently discontinuing his oxycodone regimen. 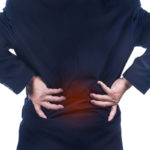 Low Back Pain: First-Line Opioids Increase Risk for Long-term Use