The daily news is full of traumatic events, occurring around the globe and close to home, the victims of which may go on to experience crippling symptoms of post-traumatic stress disorder , depression, or both.

Anyone can develop PTSD at any time after experiencing a traumatic event or series of events like a violent attack, rape, or child abuse, a car, plane, or train crash, or natural disaster such as a tornado, fire, flood, or earthquake. It is also commonly seen following combat, acts of terrorism, and mass shootings. An estimated lifetime prevalence of PTSD of 6.8% was reported by a community-based study conducted from 2001 to 2003.1

By far, the highest risk of PTSD is among combat veterans, whose likelihood of exposure to severely traumatizing events is much higher than the average person. The National Vietnam Veterans Readjustment Study (NVVRS), a large-scale survey conducted among Vietnam War veterans between 1986 and 1988, reported an estimated lifetime prevalence of PTSD of 30.9% for men and 26.9% for women.2

Depression is also a common response to trauma. A survey of survivors from the Oklahoma City bombing demonstrated an increase in depression from 13% before the bombing to 23% after the bombing.3

Large-scale studies of war veterans with PTSD have demonstrated that it is highly likely to be accompanied by depression.4 Results from a large national survey showed that depression is nearly 3 to 5 times more likely to emerge in those with PTSD than those without PTSD.5 A recent large meta-analysis composed of 57 studies, across both military and civilian samples, reported a comorbidity rate of 52%.6 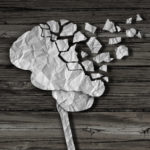 ‘Minor’ Traumatic Brain Injuries are Anything but Minor