In a recent study published in the Journal of Pain, researchers from the University of Washington in Seattle and the University of Pittsburgh, Pennsylvania, found an association between sleep quality and next-day pain intensity in children undergoing major surgery.1

Patients of all ages commonly experience persistent postsurgical pain, including an estimated 22% of children.2 Poor sleep has been implicated in acute and chronic postsurgical pain in adults, and earlier findings showed that impaired sleep the week before surgery predicted greater acute postoperative pain in children, 18% of whom developed persistent pain 1 year later.3.4

However, no previous research has examined the potential role of sleep in persistent postoperative pain in children. “Understanding directional relationships between daily sleep and pain is critical to development of targeted interventions for children experiencing problems with pain, sleep, and recovery after surgery,” wrote the investigators in the present study.

To that end, the researchers investigated temporal associations between daily sleep patterns and pain in children age 11 to 17 undergoing major surgery of the spine (n=50) or chest wall (n=10). At baseline (presurgery), 2-weeks after discharge, and 4 months postsurgery, patients completed wrist actigraphy sleep monitoring and twice-daily electronic sleep diaries for 7 days, as well as the Adolescent Sleep Wake Scale at each timepoint to assess sleep quality.

Unstandardized beta coefficients (B) associated 95% confidence intervals,were used to “estimate magnitude and direction of associations between changes in dependent and independent variables while accounting for clustering by individual.”

After controlling for age, sex, daytime sleep, and medication, the findings show significant reductions in sleep quality (B = -0.88, P <.001) and efficiency (B = -1.50, P =.036) at 2 weeks vs baseline, with a return to baseline levels at the 4-month mark. In addition, an association between worse nighttime sleep quality and greater next-day pain intensity was found (B = -.15, P =.005). No association was observed between postsurgical pain and sleep efficiency, or between daytime pain and subsequent sleep.

Future studies should aim to replicate these results in a larger sample and with a greater variety of surgeries. “These longitudinal findings suggest that poor sleep quality may continue to influence the experience of postsurgical pain within individual children even 4 months after surgery,” the investigators wrote. This relationship may point to sleep quality as an “important target to direct interventions to help improve overall recovery after surgery.”

In this study, poor nighttime sleep quality was associated with greater reported next-day pain intensity in children undergoing major surgery of the spine or chest wall.

Study limitations include some degree of data lost to follow-up and the possibility that certain moderating factors may not have been accounted for, both of which may have influenced the observed links between sleep and pain. In addition, the study did not include children not undergoing surgery, who would have served as control subjects. 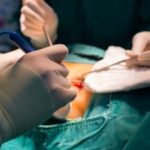