Pilomatricomas were originally described by Malherbe and Chenantais in 1880 as calcifying epithiomas and thought to be of sebaceous gland origin. In 1905, Malherbe reexamined the tumors, determined the origin to be hair matrix cells and suggested the term pilomatrixomas. Today both terms are used interchangeably throughout the literature.

What you should be alert for in the history

Pilomatricomas usually present in children and adolescents but can occur at any age. There is a bimodal age distribution, with peaks in the first and sixth decades. Females are affected more commonly than males in a 1.75: 1 ratio. Patients may give a history of previous trauma to the area but that is not always the case.

The most common presentation is a solitary, flesh-colored, firm nodule on the head or neck (Figure 1). They are often rock hard, due to calcification, with jagged, irregular borders. They can also be found on the upper trunk and extremities, and less commonly the lower extremities. They often have a bluish hue.

There also may be overlying atrophy presenting as a semitransparent epidermis with yellow or white showing through the surface. Giant, exophytic and cystic versions can also occur. Most pilomatricomas are asymptomatic but when inflamed become associated with pain or tenderness. When the skin is stretched taut, a pilomatricoma may show multiple irregular facets and angles, referred to as the “tent sign.”

An experienced clinician can diagnose a pilomatricoma with fair certainty. However, if unsure, a skin biopsy can be performed to confirm the diagnosis.

On histopathology, a pilomatricoma is a sharply demarcated tumor with a connective tissue capsule. The tumors are usually located in the lower dermis extending into the subcutaneous fat and composed of irregularly shaped islands of epithelial cells within a cellular stroma (Figure 2). Characteristically, the cells in the islands consist of basophilic cells and “shadow cells” (or “ghost cells”) (Figure 3).

Since most tumors contain calcium deposits, deeply basophilic deposits can be seen or highlighted with a von Kossa stain. The cellular stroma often contains many multinucleated giant cells. Other features that can be seen include ossicfication and melanin deposits. Proliferating pilomatricomas, with nuclear atypia and mitotic figures, are a histologic subtype.

Variable-frequency ultrasound has been used in the diagnosis of localized skin lesions but lacks specificity with pilomatricomas. Fine needle aspiration has led to misdiagnosis and is not recommended.

Pilomatricomas, especially when not calicified, can resemble many other cutaneous tumors, such as epidermoid cysts, pilar cysts, dermoid cysts, squamous cell carcinomas, basal cell carcinomas as well as other follicular neoplasms, such as trichoepithelioma and trichoblastoma. In children, the clinical differential diagnosis is usually more limited. Pilomatricomas can mimic other follicular growths, epidermoid or pilar cysts, dermoid cysts, and brachial cleft anomalies. Lymphadenopathy and foreign body reactions should also be considered. Rarer tumors to include in the differential diagnosis include: follicular hybrid cysts, pilomatrical carcinoma, ossifying hematoma, chondroma, fibroxanthoma, giant cell tumor, and osteoma cutis.

Pilomatricomas are most common in childhood and adolescence. A bimodal age distribution is observed in the first and sixth decades. There is a female predominance, with a female to male ratio of 1.75: 1 to 2.5:1.

The origin of pilomatricomas is unknown. Some patients relay a history of trauma but it is unknown if there is a correlation.

Histologically, the cells in pilomatricomas resemble hair follicle matrix cells. Mutations in the beta-catenin gene, CTNNB1, are thought to be responsible for the growth of these tumors, by activating gene transcription via Wnt-TCF-Lef-1, which leads to abnormal matrical cell proliferation.

With small, stable tumors, observation alone may be the appropriate recommendation, especially in younger children. If they are on the face and cosmetically unacceptable, consider excision.

For larger lesions that are symptomatic, expanding, or in cosmetically sensitive areas, surgical excision should be undertaken. The risk of recurrance postexcision is approximately 5%.

Once a clinical or histopathological diagnosis of pilomatricoma is made, patients can be followed or surgical excision can be performed. No further tests or follow-up are warranted.

In cases where pilomatricoma recurs repeatedly postexcision, pilomatrical carcinoma should be considered. This is the malignant counterpart of pilomatricoma and is seen almost exclusively in adults, typically men around 60 years of age. These are rapidly growing, locally aggressive tumors that warrent prompt surgical intervention. If a child is given a histopathological diagnosis of pilomatrical carcinoma, a second opinion should be sought before further workup and treatment is undertaken.

Julian, CG, Bowers, PW. “A clinical review of 209 pilomatricomas”. J Am Acad Dermatol. vol. 1998. pp. 191-5. (A retrospective chart review of 209 cases of pilomatricoma. This series highlights the wide range of clinical presentations of this benign tumor and confirms a bimodal occurrence.)

Pirouzmanesh, A, Reinisch, Jf, Gonzalez-Gomez, I, Smith, EM. “Pilomatrixoma: a review of 346 cases”. Plast Reconstr Surg. vol. 112. 2003. pp. 1784-9. (This large retrospective case series from Los Angeles Children's Hospital showed a female to male ratio of 1.75:1 and a mean age of 5.8 years. Thirty-six percent of patients had pain and tenderness associated with their pilomatricoma.)

Danielson-Cohen, A, Lin, SJ, Hughes, A, An, YH. “Head and neck pilomatrixoma in children”. Arch Otolaryngol Head Neck Surg. vol. 127. 2001. pp. 1481-3. (A review of 51 children with head and neck pilomatricomas. Multiple tumors were found in 10% as well as a higher female predominance.)

Cigliano, B, Baltogiannis, N, De Marco, M, Faviou, E. “Pilomatricoma in childhood: a retrospective study from three European paediatric centres”. Eur J Pediatr. vol. 164. 2005. pp. 673-7. (A European perspective on pilomatricoma is given in this review of 83 patients. The correct preoperative diagnosis was made in 82% of cases. This series confirms a female-to-male predominance of 2:1 and reports a single case associated with myotonic dystrophy.) 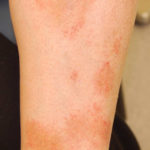