Patients with angiosarcoma may present with dusky blue or red nodules over the face, scalp and neck, which could be painful in some cases. It may follow and/ or be complicated by chronic lymphedema. Also, the patients may have history of repeated exposures to radiotherapy or environmental carcinogens like vinyl chloride.

Past surgical history is very important since certain surgical procedures may be followed or complicated by angiosarcoma, like radical mastectomy and lymph node dissection [Stewart-Treves syndrome]. The clinician should inquire about the progress of skin lesions carefully because rapid progression of any cutaneous lesion in elderly patients may raise the suspicion of underlying malignancy. Review of systems is critical since few cases might present with metastatic disease at the time of diagnosis.

Most of the patients may present with a rapidly enlarging bruise, a blue-black nodule, or unhealed ulceration over the head and neck (Figure 1). Of note, the scalp is the most commonly involved site, followed by the forehead and the central face (Figure 2). A few patients might present with chronic lymphedema or signs of metastatic disease. Bleeding from the cutaneous lesions may be seen during physical examination. Examination of the regional lymph nodes is crucial in order to determine the extent of disease.

Diagnosis of angiosarcoma is based on history, clinical findings, and histopathologic study. Pathology examinations vary, depending on the level of endothelial cell differentiation. In poorly differentiated cases, we see atypical endothelial cells with high mitotic activity along with an absence of luminal formation. Well-differentiated areas display an anastomosing network of sinusoidal vessels with low mitotic activity. Endothelial markers like von Willebrand factor, CD34, CD31, agglutinin 1, and VEGF can be expressed in angiosarcoma. However, CD31 is considered the single best sensitive and specific marker since other markers might be absent in poorly differentiated tumors (Figure 3, Figure 4).

In Kaposi sarcoma there is no clonal proliferation of the endothelial cells. In angiolymphoid hyperplasia with eosinophilia there are diffuse lymphocytic infiltrates with eosinophils at all the levels of the corium and subcutaneous tissue. In hemangioendothelioma there are dilated and congested veins with unremarkable endothelial cell nuclei and with occasional thrombi phleboliths.

Angiosarcoma commonly occurs in male patients older than 70 years of age. Caucasians are prone to the disease more than other racial groups. It might follow chronic lymphedema of any origin, whether congenital or acquired. It has also been observed following radiotherapy and exposure to vinyl chloride used in polymerization in the plastic industry. Carcinogens such as arsenic thorium dioxide factors might also play a role in the development of angiosarcoma.

Certain surgical procedures might be followed by angiosarcoma, the most classic example being a radical mastectomy and lymph node dissection [Stewart-Treves syndrome]. Immunosuppressed patients are more likely to develop this type of cancer. Recent research suggests certain mutations in tumor suppressor genes like p53 might play a role especially in angiosarcoma of the liver.

Angiosarcoma is a rare malignant proliferation of the endothelial cells representing 1-2% of all soft tissue sarcomas. The cause of this uncontrolled proliferation is usually unknown but there are certain risk factors that might play a role in the pathogenesis, which include chronic lymphedema, radiotherapy and exposure to environmental carcinogens like vinyl chloride, thorium dioxide or arsenic.

The mechanism behind malignant transformation of endothelial cells is unknown. There is one hypothesis implicating the presence of carcinogens in accumulated lymphatic fluid while another theory suggests that an altered immune response within the endothelial cells is due to loss of afferent lymphatic connections.

Angiosarcoma is one of the most devastating and lethal types of cancer. Possible complications include chronic lymphedema, local recurrence and distant metastasis. It is an aggressive tumor that commonly involves the head and neck of elderly people. Sometimes it invades vital structures of the head and neck and in this situation it is very difficult to excise surgically with wide margins. The survival rate is less than 14% over a 5-year period with local recurrence rate reported to be as high as 26-100%.

The mainstay treatment for angiosarcoma is surgical excision with wide margins (at least 5 cm). The local recurrence rate is very high in spite of wide excision. Mohs surgery has been used, especially for early, smaller lesions less than 10 cm. Regional and distant metastasis is also common. Metastasis can occur by lymphatic or hematogeneous spread and typically involves the lymph nodes, lungs and liver. Because of this aggressive behavior of the tumor, smaller lesions especially those over vital structures are amenable to Mohs micrographic surgery.

Radiotherapy has a palliative role especially in recurrent or metastatic disease. Few case reports showed response to doxorubicin, paclitaxel, and thalidomide. There are reports that the VEGF-inhibitor bevacizumab may be useful in at least some patients with angiosarcoma. Chemotherapy might be used as an adjunctive therapy to radiotherapy or surgical excision and it’s important for patient survival. Few reports suggest that β-blockade alone substantially reduce angiosarcoma proliferation and, in combination with standard therapy, is effective for reducing the size of the tumor and preventing metastases.

Patients should be assessed thoroughly to determine the extent of the disease and the involvement of vital structures like the eye. Although there is no staging system for angiosarcoma, a full detailed history and physical examination are very important to find out possible precipitating factors such as chronic lymphedema or radiation therapy; indeed, these factors might be associated with a high recurrence rate or distant metastasis after wide local excisions. Histologic examination of the margins after surgical excision is crucial; however, it is not predictive of the local recurrence or the metastasis rate because of the nature of the disease and its tendency toward local recurrence (even with negative margins at the time of the surgical excision).

There are other factors that might affect patient response to the treatment – these factors include the clinical size of tumor and degree of cellular differentiation. Combination treatments of chemotherapy, radiotherapy, and surgical resection is recommended, utilizing a multidisciplinary approach by dermatologists, radiation oncologists, and oncologists. Some of the tumors are nonresectable due to their size or involvement of vital structures. Close follow-up of the patient after surgical excision and/or radiotherapy is very important.

The presence of chronic lymphedema in the head and neck after radiation therapy for nasopharyngeal carcinoma possibly contributes to the development of angiosarcoma and is an early warning sign for later development of secondary angiosarcoma . The multifocal purple nodule of the irradiated skin is the hallmark to suspect the diagnosis. Long-term follow up for all patients who received radiotherapy is mandatory.

Shon, W, Ida, CM, Boland-Froemming, PS. “Cutaneous angiosarcoma arising in massive localized lymphedema of the morbidly obese: a report of five cases and review of the literature”. J CutanPathol. vol. 38. 2011. pp. 560-64. (Five cases of massive localized lymphedema-associated angiosarcomas are presented in this review. As the obesity epidemic escalates, this problem may be increasingly recognized.) 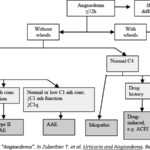