Dr Colloca’s group studies placebo analgesia – not, as it is relates to clinical trials, although her work has implications in that field – but rather, as a model to explore endogenous pain modulatory systems. She and her colleagues aim to optimize a multi-disciplinary and integrative approach to pain management.

As a way to emphasize the importance of reaching a better understanding of endogenous pain modulatory mechanisms, Dr Colloca mentioned the fact that every year, thousands of phase 2 or phase 3 clinical trial painkillers are discharged, due to the presence of placebo responses. In 2011, clinicaltrials.gov listed > 4000 ongoing pain trials — in the last 5 yrs, only 5 new painkiller trials were approved.

Dr Colloca’s main research interest seeks to understand how placebo analgesia targets pain modulatory systems, a line of research started by Howard Fields of the University of California, San Francisco1. Placebo analgesia is known to be mediated by the release of endogenous opioids in the brain, through binding to µ-opioid receptors, as indicated by inhibition of placebo effects by the opioid receptor antagonist naloxone.

If expectancy-induced analgesia is to be used as a model to target endogenous pain modulatory systems, any pain treatment will need to take the psychosocial context into account, context in which expectancy plays a crucial role, says Dr Colloca. Expectancy was shown to modulate pain outcomes in a in synergy with commonly used treatments. Dr Colloca mentions the two main components of pain modulation: the pharmacodynamic component, and the placebo component with its psychosocial and expectancy aspects2.

To place her current research into context, Dr Colloca summarized studies she conducted as a pre-doctoral fellow, investigating the role of expectancy in modulating pain perception3. In these studies, patients in a “post-operative setting” received morphine using two different strategies: in an open way where they were informed that the drug was being provided, or in a “hidden” way. Pain inhibition was reached faster for patients receiving morphine in an open fashion, than when the drug was delivered in an “hidden” fashion. This difference, Colloca adds, represents the psychosocial component, the contribution of expectancy in modulating clinical outcome. On the opposite end of the spectrum, a nocebo effect was shown to occur (with increased levels of perceived pain), when patients were informed that morphine would no longer be administered. This nocebo effect represents another example of the contribution of expectancy – negative here – in modulating pain.

With these observations in mind, Dr Colloca and her colleagues sought to establish a model with the goal of understanding mechanisms of expectancy-induced analgesia, in which they used classical conditioning. A unified model for expectancy-induced analgesic effects should integrate conditional, visual and verbal cues, information which, upon processing by the brain would lead to expectations, themselves resulting in either a placebo or nocebo effect and associated changes in behavioral and/or clinical outcome.

The paradigm researchers used was quite simple: volunteers received either a painful stimulus in association with a red light, or were shown a green light in the absence of noxious stimulus. Two such conditioning phases were performed, during which a series of red light+pain or green light+no pain were presented to volunteers in random order. In the testing phase, the same noxious stimulus was delivered in conjunction with both the red and the green lights. Pain intensity perceived during that phase was significantly greater for volunteers presented with the red light (previously associated with the painful stimulus), than for those presented with the green light, indicating the contribution of a strong “expectancy” parameter in the modulation of the “pain experience”.

Other experiments showed that conditioned placebo analgesia persisted when subjects were aware of the fact that they were receiving a placebo, and a conditioning paradigm similar to the above-mentioned one showed that injection of vasopressin led to a boost in expectancy-induced analgesia in women.

Research presented during this symposium, added to previously published work, indicate that placebo effects rely on activation of modulatory systems and release of endogenous opioid as well as of non-opioid neuropeptides. This type of placebo research represents, according to Dr Colloca, “a unique ‘tool’ to understand crucial neurobiological aspects of the top-down modulation of sensorial and affective pain experience”. These findings on mechanisms of placebo and nocebo effects will be useful in further exploring how modulatory systems relate to clinical outcomes, both in clinical trials and practices, adds Dr Colloca. 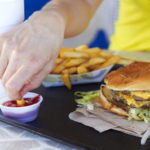 Poor Diet Leads to Prolonged Recovery From Induced Chronic Pain: An Interview of the Study Researcher