PALM SPRINGS, Calif. — Over-coupling of the amygdala and central executive network may be the neural basis of maladaptive strategies used to cope with chronic pain, according to a speaker here.

“Using probabilistic mapping we can actually subdivide the amygdala into it’s individual components — the basal lateral amygdala and the central medial amygdala — based on patterns of resting state fMRI, despite fMRI typically having a poor resolution,” Mackey said. He presented the study at the American Pain Society’s Spring Pain Conference, which occurred in conjunction with their 34th Annual Scientific Meeting.

The researchers used the 36 healthy participants from the 1,000 Functional Connectome Project to develop the probabilistic map and separate the amygdala into it’s separate parts, and then applied the map to the low back pain and control patients to assess correlation with the central executive network (CEN), the salience network (SN) and the default mode network (DMN).

These disruptions in amygdala connectivity correlated with maladaptive behaviors on a pain catastrophizing scale, the researchers found.

“All of the enhanced connectivity we found in the basal lateral amygdala to the CEN were modulated by pain catastrophizing, particularly on two of the three parts of the scale — rumination and helplessness,” Mackey said.

In the future, he and colleagues hope to develop classification methods based on the findings, as well as to determine the effects of treatment on connectivity, and to develop targets for real-time fMRI neurofeedback and transcranial magnetic stimulation. 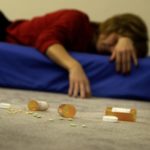 Stratifying Patients Based on Response to Opioids, Non-Opioids