For many women, the pain of breast cancer does not end after surgery, and chronic pain after mastectomy—termed postmastectomy pain syndrome (PMPS)—can be mentally and physically debilitating.1,2

“Studies have shown that between 20% and 30% of women develop symptoms of PMPS after surgery. This number varies in the literature,” says Susan K. Boolbol, MD, chief of breast surgery at Mount Sinai Beth Israel, and clinical director of the Cancer Network at the Mount Sinai Health System in New York City.

“PMPS is a type of chronic neuropathic pain syndrome that can occur following breast surgery. It is typically associated with nerve fiber injury, but there may be other etiologies. It may be the result of trauma to the nerves during surgery or as a result of scar tissue,” explains Dr Boolbol.

PMPS was first described in the late 1970s. As with other neuropathic pain syndromes, the condition starts with tissue damage, inflammation, and nerve damage. Initial injuries are caused by the trauma of surgery, but many patients may suffer additional damage from postoperative chemotherapy or radiation. Peripheral sensitization, neuroma development, and spontaneous activity of sensitive and excitable regenerated nerve fibers can cause pain that continues long after recovery from treatments.2

“Symptoms are typical of neuropathic pain and include burning, tingling, and lancinating pain in the area of surgery,” says Houman Danesh, MD, director of the integrative pain management division at the Mount Sinai Health System. This pain has been described as throbbing, pins and needles, shooting, scalding, aching, or shooting.2 Although the pain can range from mild to severe, approximately 10% of patients describe the pain as severe enough to significantly compromise their quality of life.1 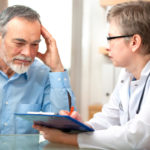