Chronic spinal pain and depressive disorders — particularly chronic depression — may each represent a risk factor for the other condition, according to a study published in the Journal of Pain.

In this study, researchers evaluated interview data from the National Comorbidity Survey (NCS), which used a modified version of a structured psychiatric diagnostic interview, the Composite International Diagnostic Interview (CIDI). Data were collected from a stratified participant sample between 1990 and 1992 (NCS-1; n=8098; ages, 15-54). The participants were tracked and interviewed 10 years later, between 2000 and 2001 (NCS-2; n=5001) using customized interview questions based on responses from the NCS-1. For NCS-2, 5463 of the NCS-1 respondents were traced, with 166 of those respondents reported as deceased.

NCS-2 respondents were also queried about their age at onset of lifetime major depressive disorder (MDD) or dysthymic disorder. MDD and DD diagnoses were based on CIDI response patterns during both NCS-1 and NCS-2 interviews. The number of years between NCS-1 and the development of incident MDD or dysthymic disorder was examined.

Study limitations include the lack of assessment of pain duration or intensity at NCS-1.

Back Pain Depression
Next post in Back & Spine Pain 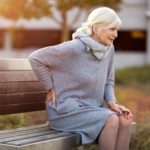 Persistent Back Pain Linked to Earlier Mortality in Older Women