Lumbopelvic pain (LPP) in well-functioning older adults was found to be associated with greater walking-related energy expenditure and reduced walking endurance — both perceived and observed — compared with individuals without LPP in an analysis of the Baltimore Longitudinal Study of Aging published in the Journal of the American Geriatrics Society.

Investigators administered a questionnaire to 878 well-functioning older adults age 60 to 89 years to determine the presence and severity of hip and back pain and walking ability in the 12 months prior to study enrollment.

Mild and moderate to severe LPP were reported by 31.4% and 15.7% of study participants, respectively. Increasing LPP severity was associated with worse reported walking ability (P <.001), reduced endurance walk performance (P =.007), and increased energetic cost of walking (P =.049). No association was found between severity of LPP and worsening gait speed (P =.31).

Over a mean 2.3-year duration, new (13.8%) or sustained cases (34.2%) of LPP were associated with worse follow-up level, greater mean decline, and greater likelihood of meaningful decline in reported walking ability than in individuals who did not have LPP (37.9%) or for whom LPP had resolved (14.1%).

The use of questionnaires to assess functional status may have resulted in misclassification of LPP severity in some patients. In addition, the longitudinal analysis failed to differentiate severity of pain, which potentially limited the investigators’ ability to determine an association between the status of LPP at follow-up and walking performance.

“Aside from a reduction in reported walking ability, the longer-term consequences of LPP are unclear and may depend on how individuals and their providers respond to and manage their back pain,” concluded the study authors.

Back Pain Elderly Pain
Next post in Abdominal & Pelvis Pain 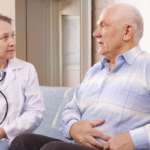